* We are currently not accepting food waste from the public until further notice.

In order to begin accepting food waste from the public again, we need to have enough volunteers each committed to one day a week*. We’re looking to build up a pool of 12 or more volunteers before we can consider re-opening the drop-off set up.

*Volunteers can either double up on a day with others (working together or one doing early in the day and the other late in the day) or be flexible and be able to cover days that others can’t make (with advance notice).

The main activity of volunteers would be to treat the food waste that were dropped off (an orientation would be provided). The activity can take anywhere from a few minutes to over an hour, depending on how much food waste has been dropped off.

Other activities (which may occur once or twice a month) that volunteers can help with (no commitment necessary) include trenching or composting the treated food waste, sifting ready-to-use compost, and other general garden activities.

If you are interested in volunteering, which would then allow you to also bring your own food waste to the garden, please fill out the following form: https://downtoearthgarden.org/volunteersignup/

Our 24-hour food waste drop-off completely closed to the public on March 22, 2020 (Sunday). DSNY (Sanitation) picked up the last batch of food waste (a portion of what we receive) on March 20, 2020 (Friday). Also, our pool of volunteers went from 11 people to only 3 who were willing to continue during that last week before March 22.

Note. Our garden changed its name on July 1, 2020. The following is information on our composting activity before then and refers to our garden by its previous name, Children’s Garden.

The Children’s Garden began doing the bokashi method of composting in the fall of 2009 and became a food waste drop-off site from 2010 until the pandemic forced the closure of the drop-off setup on March 22, 2020.

In November 2018, our community garden became a public food scrap drop-off site through DSNY (NYC Dept of Sanitation). So, people could find our drop-off site online (link at end of this paragraph), and DSNY began picking up part of our dropped-off food waste on Mondays, Wednesdays, and Fridays. Most of the food waste is processed (fermented) at the garden, and then used to amend the soil or to produce compost for the gardens and the community (non-garden members can request for some of the compost and amended soil). By the end of 2019, we collected 10.82 tons for the year (combined collection for both gardens: El Sol Brillante and the Children’s Garden); 6.16 tons were bokashi-treated in garden, and the rest, 4.66 tons, were given to DSNY to be composted by them (see graph below).
Link: NYC Food Scrap Drop-Off Locations [El Sol Brillante-Children’s Garden, 546 E 12th St]

Before November 2018, our 24-hour food waste drop-off location was not publicized since its start in 2010. People found out about our drop-off site either by word of mouth, by those who took our workshops, or if they passed by the garden and noticed the drop-off setup.

Below are graphs and data of the amount of food waste we’ve processed at both community gardens combined.

Quantity of food waste diverted by both gardens combined 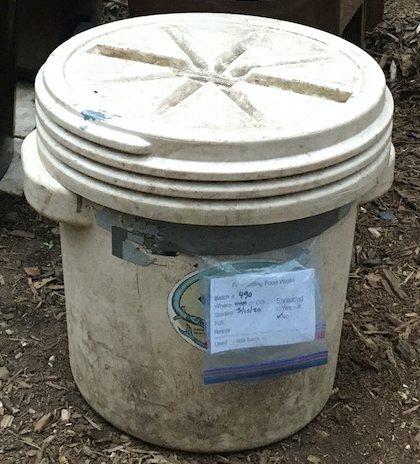 See also “History of Composting Food Waste and Leaves at El Sol Brillante and the Transition to the Bokashi Method.”